“Let us listen for those who have been silenced. Let us honour those who have been devalued. Let us say, Enough! with abuse, abandonment, diminishing and hiding. Let us not rest until every person is free and equal. Let us be women who Love.” From Sarah Bessey’s Jesus Feminist: An Invitation to Revisit the Bible’s View of Women.

When the 1970s wound down to a close, feminist scholarship bloomed anew. Women who had previously felt unheard began making a lot of noise. Gloria Anzaldúa’s works Borderlands: The New Mestiza, “Speaking in Tongues” A Letter to Third World Women Writers” and This Bridge Called My Back: Writings by Radical Women of Color brought the plight of the displaced Chicana to the forefront.

Speaking to her hermanas, Anzaldúa implemented her viewpoint as both a lower-class Chicana and an academic to issue her battle cry against discrimination of those who “live on the border” (165). Anzaldúa’s works, which include academic essays and poetry, encourage women to write in any way they know how, reminding the reader that she need not be a scholar to put her words to paper and that her voice, uneducated or not, is both important and necessary.

This applies to women today as much as it did then. The voices of women and other marginalized people need to find the freedom that writing affords us. Your voice, your message, is important and deserves to be heard, regardless if I agree or not. We must teach our daughters, our nieces, our mothers how to speak their minds and refuse the silence. This is our calling and one of our our highest privileges of service.

Like Anzaldúa’s Mestiza who lives on the border between the United States and Mexico, I believe those of us who comfortably speak with a Southern accent within the university classroom find ourselves alienated and often judged. By referencing Anzaldúa’s work with the Other, Borderlands can be interpreted as a guide to the Southern working-class woman with an accent might experience when she attempts to return to college to learn academic speak and writing.

Anzaldúa’s work as a whole spoke to me on a personal basis, but specifically her goal to “break down dualities that serve to imprison women” (Anzaldúa 5). Speaking more figuratively than literarily, I felt that I was experiencing a kind of duality while I looked for my identity as both academic and reformed hillbilly. Shifting identity is a common theme within Anzaldúa’s work, and the New Mestiza never feels on solid ground, because she “migrates between knowing herself” and not knowing (7). While I love being a student and writing, a part of me feels as if I am being silenced when I must leave behind my native words, my native voice. Anzaldúa quotes Ray Gwyn Smith: “Who is to say that robbing a people of its language is less violent than war?” While academic work does not technically erase all traces of my dialect, the goal is there to do so.

So speak your voice, tell your story. We, your sisters, wait to hear your message. How will we know you if you do not share? 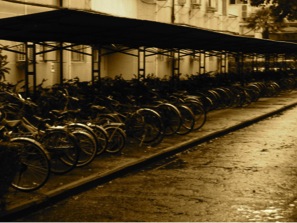